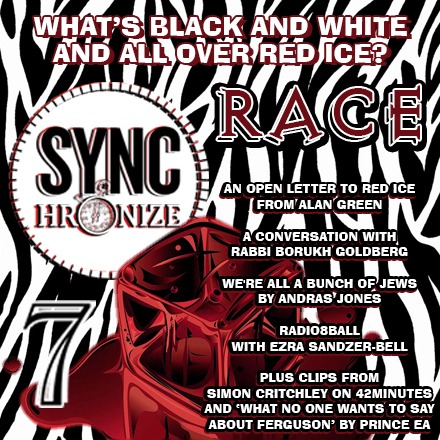 
09.17.14 Episode 07: A Spider in His Hand
In this issue: Alan and Andras return from the Oly Sync Summit to a world on fire. . . . Click here for the full Sync Summit video collection.
Alan Abbadessa-Green delivers an open letter to Henrik Palmgren and Red Ice Creations.
Alan has a conversation with Rabbi Borukh Goldberg, author of Spilled Blood, A False God, & Real Estate, a conversation that picks up from their July 13th 42Minutes
Clips from the film "Gentleman's Agreement" and Jim Morrison lead into Andras Jones' audio essay where he explains "We're all a bunch of Jews" . . . Click here to listen to The Middle Chamber Episode 16
Ezra Sandzer-Bell of audiomancy.netjoins Alan and Andras for a Radio8Ball consultation of the Pop Oracle, via the music of The White Stripes.
A clip from Simon Critchley on 42Minutes episode 149
Audio from Prince Ea's video "What No One Wants To Say About Ferguson" . . . Visit Facebook.com/PrinceEa
Plus the new single from Andy Shmushkin
Posted by Alan Abbadessa-Green at 4:38 PM

Email ThisBlogThis!Share to TwitterShare to FacebookShare to Pinterest
Labels: Synchronize